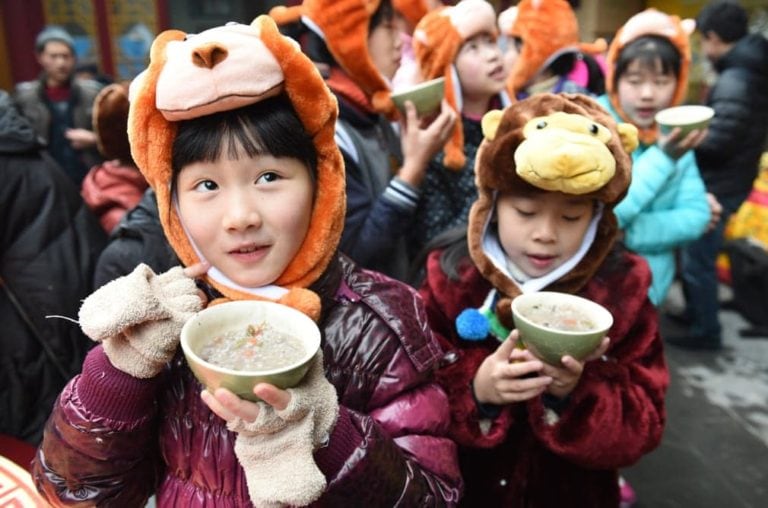 For well over one thousand years, Chinese people have celebrated the Laba Rice Porridge Festival. It is called the Laba Festival because it occurs during the 12th lunar month known as “la,” on the eighth day. In Chinese, “ba” means eight. The belief surrounding this celebration is that the founder of Buddhism, Sakyamuni, realized the truth on this day and became a Buddha.

Historically, Laba was occasion to honored dead loved ones by presenting sacrifices. The God of Grain was worshipped with prayers being offered up for bountiful harvests and good luck for the family.  Government officials also performed a ritual in which an earthenware Ox was beaten with a colorful club.  Onlookers then did their best to secure a coveted Ox piece to use as a amulet to protect against pests and bring luck to their farming.  While these practices still exist in China, the custom has become rare in some areas.

Today, the festivities include a porridge eating event in celebration of the harvest. The congee can consist of various ingredients, such as rice, beans, nuts, bean curd, and meat.  Dates and other dried fruits are often added as well.

Great care is taken to prepare the elaborate porridge.  Often, it is boiled for hours before it is set out as a presentation to the ancestors. Later, family and friends eat to their heart’s content, but a little is always leftover to symbolize a good harvest and prosperity for the family the next year.  There are some people who also put the porridge directly on trees to ensure a plentiful harvest.

Have I made you hungry?

Enjoyed this post?  Please considering sharing it on social media using the buttons below. Thanks much!  多谢。